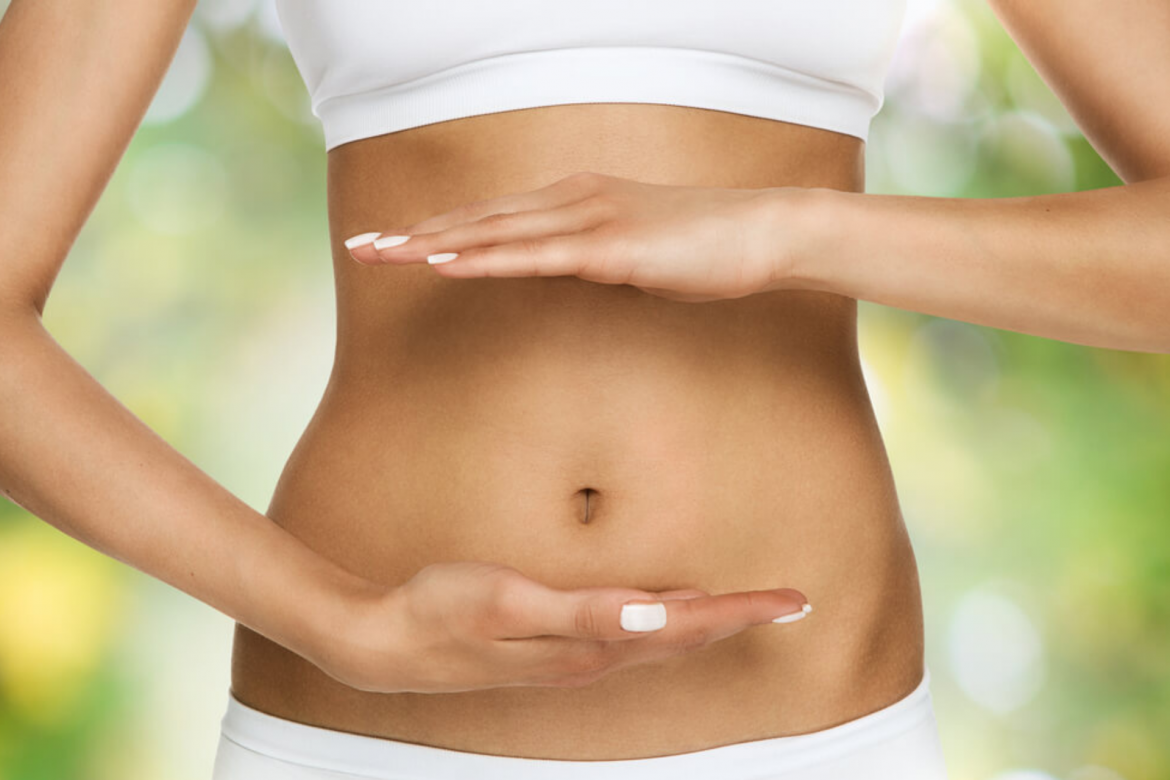 Nothing created by man compares to the magnificent design of the human body. For example, today you will produce 10 liters of digestive juices to break down the food you eat to enable it to pass through your ‘inside skin’, the gastrointestinal wall. Your intestine is a 30-foot long tract with a surface area the size of a small football pitch, which effectively replaces itself every four days. The health of your gastrointestinal tract is maintained by a team of between 300 and 4,000 strains of bacteria and other microorganisms.

Like all other animals, we spend our physical lives processing organic matter for waste. How good we are at it determines our energy level, longevity, and state of body and mind. A lack of nutrients and the wrong kind of food can result in faulty digestion, impaired absorption, abnormal gut reactions, including bloating and inflammation, gut infections, and poor elimination. The knock-on effects disrupt every body system, hormonal balance, mental health, and our ability to detoxify.

How good is your digestion?

Score 1 point for each ‘yes’ answer. If you scored more than 4, I advise you to follow the recommendations in this programme and consider consulting a health practitioner or nutritionally oriented doctor

Digestion starts in the senses. The sight and smell of food initiate chemical reactions that get us ready to assimilate and digest food. Cooking from scratch, therefore, kickstarts your digestion! Chewing is particularly important because messages are sent to the digestive tract to prepare different enzyme secretions according to what is in the mouth. It also triggers the production of stomach acid, which in turn encourages the production of digestive enzymes and bile. Food then passes into the stomach, where large proteins are broken down into smaller groups of amino acids. The first step in protein digestion is carried out by hydrochloric acid released from the stomach wall, which is dependent on zinc.

Hydrochloric acid production often declines with age, as do zinc levels. The consequence is indigestion, particularly noticeable after meals high in protein. The most common reason for acid reflux is actually low stomach acid. A ring-muscle (sphincter) between the oesophagus and the stomach can lose tone and then fails to close properly, allowing stomach acid to enter the oesophagus, where it can damage the walls and cause pain. Common foods or drinks that affect sphincter tone are coffee, alcohol, fizzy drinks (incl. water), chocolate, tomatoes and spicy foods.

Taking an antacid will deal with the immediate discomfort, but in the long run, only make the problem worse. The nutritional solution for too little stomach acid is to avoid aggravating foods and to take a digestive supplement containing betaine hydrochloride, plus at least 15mg of zinc citrate.* A minority of people really do produce too much stomach acid. This is usually rectified by avoiding acid-forming and irritating foods and drinks: alcohol, coffee, tea, and aspirin all irritate the gut wall. Meat, fish, cheese, eggs and other concentrated proteins stimulate acid production and can aggravate over-acidity. The minerals calcium and magnesium are particularly alkaline and tend to have a calming effect on people suffering from excess acidity.

The stomach also produces a range of enzymes to break down protein. Protein digestion then continues in the first part of the small intestine, the duodenum, into which digestive enzymes are released from the pancreas and liver. The pancreas is the primary organ of digestion, and special cells in it produce enzymes for breaking down carbohydrates, fats and proteins.

The production of digestive enzymes depends on proper chewing (see above), adequate levels of stomach acid, and requires many micronutrients, especially vitamin B6. Sup-optimal nutrition often results in sub-optimal digestion, which in turn impairs absorption, so that the nutritional intake gets worse and worse. The consequence is undigested food in the small intestine, which encourages the proliferation of the wrong kind of bacteria and other microorganisms. Symptoms can include flatulence, abdominal pain and bloating. The easiest way to correct this kind of problem is to take a broad-spectrum digestive enzymes supplement* with each meal.

Before being digested, fat has to be specially prepared. Bile is produced by the liver and stored in the gallbladder. Bile contains lecithin, which helps to emulsify large fat particles and turn them into tiny ones with a greater surface area for the fat-splitting enzyme lipase to work on. Supplementing lecithin granules* can help people with poor tolerance of fat, e.g. those who have had their gallbladder removed.

Our digestive tract is home to a whole host of microorganisms, most of them friendly, some of them not so much. As most of our microbes are anaerobic – meaning they can only exist in an oxygen-free environment – they cannot be grown in a petri dish. Now that genome mapping has become affordable, researchers are able to discover new, so far unknown species, every day. While we do not yet know what they all do, what we can say is that those with the highest diversity of microbes are the healthiest people.

One of the ways in which probiotics may help is by promoting healing and repair of the digestive tract. When the digestive tract is inflamed, perhaps due to disease, infection, or irritation by alcohol, painkillers or antibiotics, it can become abnormally permeable, which is a major cause for the development of food intolerances and detoxification problems. This sequence of events can also cause other inflammatory diseases, such as arthritis, which has been shown to benefit from probiotics. The digestive tract can be restored to health by short-chain fatty acids, which are naturally produced by Lactobacilli and Bifidobacteria.

The best researched benefit of probiotics is in cases of diarrhoea, especially those brought on by bacterial infections. In most cases, provided the right strain of bacteria at the right strength is used, probiotics can halve the recovery time from a bout of diarrhoea. A great probiotic supplement to take is Saccharomyces boulardii, a transient yeast that has been shown to alleviate diarrhoea. Hence, probiotics are an exotic traveller’s best friend.

If you suffer from food intolerances, chances are probiotics are going to help you, too. Many food reactions may not be solely due to food intolerance, but also the feeding of unfriendly bacteria, which then produce substances that activate the immune system in the gut. Probiotics have been shown to help reduce inflammatory reactions in food intolerances by lessening the response in the gut to the offending foods.

Another way to boost the healthy bacteria inside you is to eat foods that feed them. The best food for your health-promoting bacteria is fibre. Fibre is a type of carbohydrate that is indigestible to us, but our good bacteria love it – and they break it down for us, even extracting more nutrients for us to absorb. This food for bacteria is often referred to as prebiotic. Fibre is found only in plant foods, such as fruit, vegetables, nuts, seeds, pulses and grains.

Starchy foods, such as potatoes, rice, and pasta, contain starches that we can digest and break down into sugars, which feed bad bacteria and yeast. However, once these have been cooked, then cooled, the starch they contain turns into resistant starch, and that is effectively a type of fibre. We can no longer break those down, but our bacteria can. They are now a prebiotic food! This process is irreversible, so if you let your potatoes cool down, then roast them, the starch they contain remains resistant.

While indigestion can be caused by a lack or excess of stomach acid, a lack of digestive enzymes or undesirable bacteria, these are not the only possibilities. Many of the foods we eat irritate and damage our very sensitive and vitally important interface with the inside world. One such food is wheat, in which a protein called gluten contains gliadin, a known intestinal irritant. A small amount may be tolerated, but most people in Britain consume wheat in the form of biscuits, toast, bread, cereals, cakes, pastry and pasta at least three times a day. This can cause digestive discomfort and gluten sensitivity in severe cases.

The best way to get a gut infection is to eat plenty of sugar, suffer from indigestion and have regular courses of antibiotics. There are thousands of different bacteria strains in the gut, a large number of which are essential. They protect us from harmful bacteria, viruses and other dangerous organisms.

Antibiotics wipe out all the bacteria in the body, good was well as bad. The effect is even worse if you no longer have your appendix. For a long time, the appendix was thought to be a vestigial organ, now obsolete, but it now appears that it actually serves as a reservoir (a ‘safe haven’) for gut microbes, which can repopulate the bowel after insult. If the gut contains the wrong kind of bacteria, or perhaps an overgrowth of a yeast-like organism called Candida albicans, a high sugar diet, including fruit, can exacerbate the problem. Feelings of intoxication, drowsiness and bloating after consuming sugar are good indicators of a potential imbalance.

A number of powerful natural remedies have been proven to help with gut infections. Caprylic acid, extracted from coconuts, olive leaf and garlic are powerful antifungal agents. Probiotics are another good option.

Constipation has many possible causes, the most common of which is hard faecal matter. Fibrous foods (fruit, vegetables, wholegrains) provide soft, moist bulk for the digestive tract. Make sure you drink lots of water when increasing fibre content. Some foods and nutrients exert a mild laxative effect. These include flaxseeds (soak in water overnight and drink first thing in the morning), prunes and vitamin C (in doses of several grams).

Improving digestion is the cornerstone to good health. Energy levels improve, the skin becomes softer and clearer, body odour is reduced and the immune system is strengthened. The trick is to work from the top down, first ensuring good digestion, then absorption and finally good elimination.

If you have any specific digestive difficulties, speak to a health practitioner.

Learn more about my Nutrition Programs

I can help you make healthy food choices and  lifestyle changes.

© Copyright 2020 Ana@Nutrition4You. - All rights reserved​. The information on this website is for educational purposes only. It has not been intended to diagnose, treat, prevent, or cure any disease. You assume full responsibility and liability for your own actions.